FORMER Namibia University of Science and Technology (Nust) boss Tjama Tjivikua has accused minister of higher education, training and innovation Itah Kandjii-Murangi of forcing him to appoint her daughter and her sister, and to retain her cousin at the university.

The report was written a few weeks before he stepped down as the university head.
Tjivikua’s report, which has never been reported on in the media, adds to a list of widespread allegations of interference against the higher education minister.

This includes claims that she constantly applied pressure to the previous Nust council to employ individuals close to her.

“She essentially wanted to hand-pick her choice of people to run Nust,” the source said.
The minister denied any wrongdoing.

Tjivikua said the minister summoned him to her office in July 2018 and asked that he recruit her daughter and sister.

“The minister told me she knows there are vacancies at the university and that I am standing in her way,” he said. According to Tjivikua, the minister “made several phone calls and [sent] text messages, including one with her daughter’s phone number on 13 July 2018”. “However, I did not relent to her request,” he said.

The minister’s daughter, Hepuree Murangi, is currently employed by Nust as alumni officer.
The Namibian reported in January this year that Murangi was employed without meeting the requirements of the job.

At the time, the university blamed its human resources officer for miscalculating Murangi’s past working experiences.

Tjivikua says the minister wanted her daughter to work at Nust.

The Namibian understands that Murangi was employed by telecommunications company MTN Namibia at the time.

Tjivikua said the minister also requested the recruitment of her sister, Alma Kandjii-Daniel, who previously worked at the university, but resigned in July 2013 after facing disciplinary action.

“I referred the [minister] to rules and procedures for hiring and employing. The minister pursued the matter further, but I did not relent to her request,” Tjivikua’s report said.

Kandjii-Daniel has been employed by the University of Namibia’s northern campus as human resource officer since 2016.

She this week refused to comment on the matter.

The former Nust boss recalled how the minister confronted him at the ‘Invest in Namibia Conference’ in November 2016.

Tjivikua said the minister told him he should stop harassing her cousin, Kaitira Kandjii.
At the time, Kandjii served as the university’s spokesperson.

Tjivikua said Kandjii-Murangi allegedly approached him during a lunch break and told him he was harassing her cousin.

“She told me in no uncertain terms that I touched her cousin,” Tjivikua said, adding that the minister’s remarks left him surprised and shocked.

Kandjii was dismissed from the university for the mismanagement of leave days of employees in his department and for underperformance. He was later reinstated.

Tjivikua said after the conference, he met up with the minister to present Kandjii’s non-performance record.

“She perused the file and surprisingly said to me: ‘You are his supervisor and that’s your business. Move him to another department.’”

Kandjii is now the head of the university’s alumni foundation, a department which has employed Murangi (the minister’s daughter) since November 2019.

Kandjii denied any wrongdoing when contacted.

He described Tjivikua’s report as a document that is meant “to create conflict and tension between people”.

Kaumbi threatened to take legal action against The Namibian after being sent questions three weeks ago.

“It is my name and reputation you are messing around here,” he said.

In December 2017, Kaumbi was among Kandjii-Murangi’s appointees to the board of the National Commission on Research, Science and Technology (NCRST).

Tjivikua also claimed the minister wanted him to take up the position of chief executive officer of NCRST when the interview panel had already recommended the appointment of Tjivikua’s younger brother Michael.

Alfred van Kent, executive director of higher education, training and innovation, said the ministry will not interfere in personal matters regarding the minister.

“If people are making allegations against the minister, then she must be addressed, because it is personal. It will not be appropriate for the executive director to provide statements on it,” Van Kent said.

A former Nust council member, who declined to be named, told The Namibian Tjivikua’s report was also shared with some council members.

“Some council members had to approach those mentioned in the report about the allegations, and we confirmed everything. None of the mentioned issues in that report is a lie,” the source said.

The former council member said the minister continued to interfere in the affairs of the institution – even after Tjivikua left.

“It was an ongoing struggle to get a new vice chancellor. And she (the minister) was trying to interfere in that process. She was the one who did not want to extend the VC’s acting term until a new VC was appointed.”

The minister last month said: “I did not ask Dr Tjama Tjivikua to employ my relatives. My daughter, a marketing graduate at the University of Namibia, responded to an advertisement put out by Nust. She was interviewed together with other Namibians. 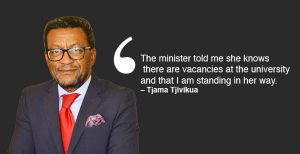 “As to how or why she was the chosen candidate for the job, contact the Nust human resources department, whose prerogative is to decide on matters of that nature.

“Also, this question illustrates the unfair and unfounded allegations made against me because when Ms Daniel . . . joined, served and left the then Polytechnic of Namibia, I was still working for Unam. How could I have influenced the process of hiring or played any part in it?

“I did not ask Dr Tjivikua why he was harassing Mr Kaitira Kandjii at some conference venue.”

She added: “My role at the time was to advise the university council on the possible repercussions of the unresolved acrimonious relationship between the two most senior executives at the institution.

“I further advised the council on the possible results of unfinished disciplinary processes at the executive and management levels, looking at the time left for the instigator, the outgoing vice chancellor [Tjivikua], to see through those processes transparently and justly,” Kandjii-Murangi said.

“My primary concern was the stability and tranquility at a university that was at the verge of leadership transition, and an incoming vice chancellor, once recruited, to deal with relational issues from the executive and management levels.

“My advising was not meant to protect any staff member, rather to act in the best interest of Nust going forward. Finally, I am not in any partnership with or co-own a fishing company with Kaumbi.” Tjivikua did not answer questions sent to him.