THE state-owned Development Bank of Namibia (DBN) has allegedly failed to institute strong action against businessman Onesmus ‘Tona’ Amadhila despite him being in arrears on loans worth N$180 million.

Sources say his loans are allegedly considered among the top non-performing loans of the DBN, but he seems to be given more time to settle his debts.

DBN chief executive officer Martin Inkumbi tried to pour cold water on the allegations of special treatment, saying the bank has been lenient with a number of its debtors.

The Namibian has, however, established that the bank has dragged several companies and individuals to court over lower amounts than Amadhila’s loans.

Amadhila is no ordinary client.

The DBN directly reports to the finance minister, a portfolio Kuugongelwa-Amadhila occupied until March 2015.

Two years later the bank gave him two more loans – one worth N$109 million and another of N$18 million.

In March 2017 the bank extended a loan of N$4 million to Amadhila again.

Inkumbi denies allegations that the DBN was soft on Amadhila.

“The DBN is not treating Mr Amadhila special in comparison to other borrowers. The same credit policy and collection process will be followed,” Inkumbi said last week

He blamed the poor economy and the Covid-19 pandemic for many businesses failing to repay their loans, and refused to provide an update on Amadhila’s loans.

Documents show that Amadhila’s loans had no fixed payment terms, and there were several years where no repayments were made on the loans.

Despite a poor payment record, the bank still extended more loans to Amadhila.

Yet the DBN handed him a N$109 million loan in November 2016 to build a mall in northern Namibia.

The bank then awarded him another N$14 million loan on the same project in June 2018.

He owed the DBN N$120 million on this loan by February this year.

Amadhila has made several payments on other loans, but concerns over special treatment remain.

Sources say Amadhila has been paying below the required instalment amount, which has been restructured several times.

Typically the bank should have recalled his facility and put him through a legal process, which has not taken place, a person familiar with this loan says.

At the current repayment rate it will take more than 20 years for Amadhila to settle the loans.

Sources say Amadhila’s DBN loans were disbursed for the construction of the Outapi Shopping Mall in the Omusati region. It houses around 42 shops.

The Ministry of Education, Arts and Culture also rents office space in the mall.

Amadhila this week said he would honour his loan agreements with the DBN.

“My business affairs are private matters, and I am not prepared to discuss them in the media. I am, however, sincere in my business dealings. I always aim to do what is right,” he said.

Amadhila said the loans awarded to his businesses allowed the creation of employment.

“I can confirm that it is as a result of the loan facilities that we were able to employ a hundred-odd Namibians,” Amadhila said.

He said business has not been the same in the past five years.

“As a result of the financial downturn, which has been experienced well all over Namibia and abroad, especially within the past five years or so, and the very unfortunate Covid-19 pandemic, business has not been as usual,” he said.

“I, however, confirm that even under the prevailing circumstances, I have continued to strive towards meeting my contractual obligations with commitment.

“How the DBN intends to deal with the situation of the economic downfall as it affects its clients remains only in their knowledge at this stage,” Amadhila said.

He rejected suggestions that the DBN favours him.

“I further condemn the suggestion that the DBN has favoured me because the bank allegedly reports to or reported to my wife.

“There is just no truth in such a statement. I regard myself as a Namibian citizen and notwithstanding my affiliation, I am first a citizen who is rule and law compliant,” he said.

The Namibian asked whether she declared her interests when the bank granted loans to her husband.

As prime minister, Kuugongelwa-Amadhila also leads the Cabinet’s deliberative sessions where parastatals, such as the DBN, are discussed.

According to the bank’s website, it issues loans between N$150 000 and N$350 million with a repayment period of 10 years.

SOME MORE EQUAL THAN OTHERS

The DBN is a government bank operating with taxpayers’ money.

The bank’s operations started in 2004, to promote and finance development in certain sectors of the economy. 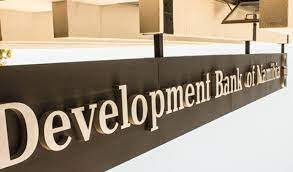 It was launched when Kuugongelwa-Amadhila was finance minister.

Unlike Amadhila, the DBN has dragged several companies to court over non-payments.

The bank sued them over a N$7 million loan awarded to the company in November 2016.

In May last year, a court ordered in favour of the bank that the company’s residential property at Swakopmund be sold.

In addition, a 7 710-square-metre plot at Finkenstein was attached.

The DBN argued in court papers that “the company failed to pay the monthly instalments on the loan despite demand and lapse of a reasonable time to do so”.

Dangote Investment CC, a company owned by Stanley Gamseb, was sued by the bank early this year over N$557 000 paid by the bank in the form of a performance guarantee on 7 August 2018.

On 23 July, the bank sold a property after a court order.

The bank also sued Onyika Trading Enterprises CC over N$1,6 million in arrears on a N$3 million loan awarded to the company in July 2012.

Two weeks ago, the court authorised the sale of assets belonging to that company.

The DBN argued in court papers that despite written demands to these companies “they have failed, neglected and refused to make payments as per the loan agreements”.

Inkumbi said the bank considers a realistic repayment arrangement that suits both the bank and the borrower.

“The bank is cognisant of the current economic environment that has put significant stress on businesses, with some economic sectors more adversely impacted than others,” he said.

He said the bank remained open to options that present practical solutions for struggling companies.

Inkumbi named the Covid-19 pandemic as the reason why many enterprises are struggling.

“The DBN’s objective is to collect all monies lent out plus interest earned thereon. In a case where repayment arrangements made with a borrower are not honoured, the bank may ultimately resort to legal action to recover money owed,” Inkumbi said.

* This story was produced by The Namibian’s Investigative Unit. Send story tips via your secure email to [email protected]