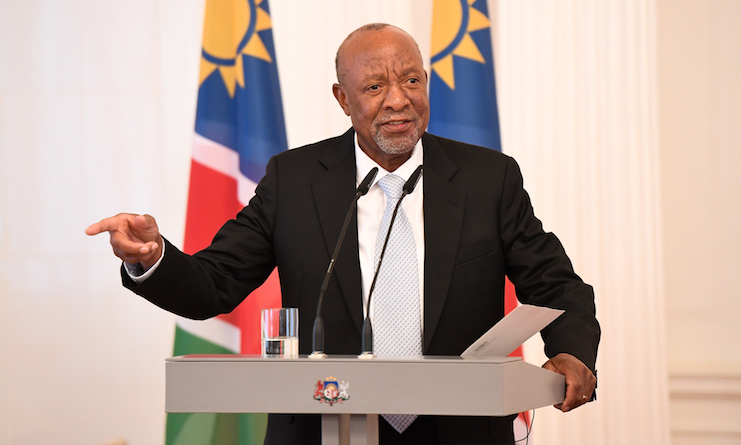 THE works ministry has hand-picked an entity – which renovated vice president Nangolo Mbumba’s farm – to renovate all government buildings, such as apartments, houses, and residential properties, that are part of the former state house near the city centre.

The same entity, the Association of Unemployed Artisans in Namibia (Auan), appears to be receiving preferential treatment from the works ministry for the exclusive contract to renovate and maintain government properties, without having to go on public tender.

In addition to the Mbumba farm renovations, Auan secured deals to renovate the VIPP police headquarters, the old state house, as well as the old ombudsman’s office, along Robert Mugabe Avenue.

The government has been denying that it is renovating Mbumba’s Amateta farm, but documents show that the works ministry led this process, including specifications on key areas to be renovated, such as toilets, fences and a water tank.

The involvement of Auan is evidence that the renovations were not purely about moving police caravans.

At least two people who work at the works ministry and understand its inner workings, complained that it has a department tasked with the responsibility of renovating and maintaining government property, however, this department is allegedly being sidelined, while its workers sit idle.

Government documents seen by The Namibian show that the works ministry entered into an open-ended agreement with the association on 11 November 2020.

According to the agreement, the two wanted “to collaborate in the renovation of dilapidated buildings owned by the government of the Republic of Namibia, in an effort that is geared towards the economic upliftment, skills development and mentorship of unemployed artisans, which has culminated in this understanding”.

The agreement, seen by The Namibian, was signed by works ministry executive director Esther Kaapanda and Florian Mwetulundila, the chairperson of Auan.

According to the agreement, the works ministry will dedicate two senior foremen artisans and two works inspectors, while the association appoints its supervisors.

The agreement stipulates that areas of cooperation will include project financing; renovation of government houses, flats and institutions; skills development; knowledge sharing and coaching; and the supply and delivery of construction material, equipment and tools.

As part of the agreement, the ministry is responsible for financing all projects, and paying Auan for the cost of labour.

In turn, Auan will pay members working on the various projects on a monthly basis.

The government would also supply and deliver construction materials needed for particular projects, while the works ministry would also buy equipment and tools for various disciplines, including brick laying, carpentry, plumbing and electrical, and other essential equipment.

The ministry, according to the agreement, would provide transportation of the association to and from work using government buses when necessary and available.

Auan would also be responsible for providing security guards to protect the materials on site, and insurance liability.

Auan is expected to provide quotations on construction materials including civil works, plumbing and electrical costs.

“The financing of projects to renovate some of the government houses, flats and institutions under this agreement shall be funded by the works ministry and Auan shall be paid for labour or work that is certified correct in accordance with the quality standards agreed upon between Auan and the ministry,” states the agreement.

“In matters not provided for, the parties shall stipulate the financial obligations,” the agreement states.

On the same day the agreement was signed, finance minister Iipumbu Shiimi granted the works ministry exemption from having to abide by public procurement laws when appointing AUAN to do work for the ministry.

Shiimi, however, stipulated one condition: “Please be informed that the procurement of the renovation materials, including equipment and tools to be used, must still follow the provisions of the act”.

This framework was used to renovate Mbumba’s farm.
To kick-start this relationship, N$9 million was allocated to fund projects to be worked on by Auan for the 2021 financial year.

The ministry motivated the move by claiming that it would cost more to put renovation and maintenance work out on public tender.

The ministry also complained that when private contractors are appointed, the government is often short-changed and does not get value for money.

“We have been rejected many times,” said Mwetulundila, who added that Auan has been pleading with the government to reserve small jobs like tiling and carpentry for Auan, which has a membership of 5 000 unemployed artisan graduates across the country.

He said theirs is a win-win arrangement, because the artisans gain experience and a bit of money, while the government saves on money as contractors often charge the government far more.

He said the fact that the government directly purchases the materials, means it also saves in terms of contractor markups.

Mwetulundila said renovation projects in Windhoek were the pilot project for government to study if reserving work for the Auan is viable, while members grow to be able to establish their own companies in order to qualify to bid directly for both government and private sector projects.