THE police over the weekend arrested a former Air Namibia employee who is suspected to have lived in Namibia for 18 years with a questionable citizenship status.

Zambian national Clement Ngonomo was for years employed as an aircraft engineer at the national airline.

Ngonomo has appeared in the Windhoek Magistrate’s Court to answer fraud and uttering charges. He is accused of contravening the Immigration Control Act after allegedly using false documents to obtain Namibian citizenship.

He used the same information and documents to acquire employment for himself and citizenship for his wife and children.

Court documents state that Ngonomo has lived in Namibia since 2003. The Namibian has been following his story since February this year.

On paper at least, Ngonomo was born at Katima Mulilo. His father’s name is Keneth Ngonomo and his mother is Fellonah Ndapidikwa, both supposedly Namibians. He managed to get Namibian citizenship (by descent) for his two minor children because they were born in Zambia to a Zambian mother.

The Ngonomos lived a normal life in Windhoek’s Otjomuise suburb. At work, he was not listed as an expatriate but fell in the category of local staff. His colleagues knew him as someone who hails from the Zambezi region.

This case also speaks to the consequences of selling national documents and potential exposure to strategic interests such as airports and harbours.

NAC spokesperson Dan Kamati confirmed last month that Ngonomo, as an Air Namibia employee, had a security access permit for Eros Airport. He said Ngonomo met the requirements for a permit. 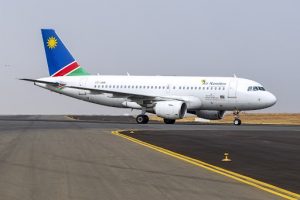 The ministry then started investigating how Ngonomo acquired a Namibian passport in the first place.

Sources said the ministry uncovered that Nogonomo’s parents did not exist on the ministry’s systems, nor could they be traced.

Ngonomo himself, authorities claim, does not have a history in Namibia prior to 2003. The ministry’s investigation allegedly also uncovered that he received his Namibian ID card in 2007 and his birth certificate during 2009. The birth certificate is believed to be fake.

He will remain in custody while his case is postponed to 16 June for further investigation.