BUSINESSMAN Adriaan (‘AJ’) Louw says he rejected the National Fishing Corporation of Namibia’s proposal to terminate a partnership criticised by the High Court as parasitic.

Louw made these remarks last week when asked about the government’s decision to divorce the scandal-hit Seaflower Pelagic Processing, which is 40% state owned.
“The matter is sub judice, but I can confirm that we have rejected the repudiation and have put Fishcor to terms,” he said.

The millionaire had an interview with The Namibian on wide-ranging issues such as his partnership, alleged Fishrot links and his relationship with lawyer Marén de Klerk.

He believes previous media reports were unfair to his business, which has been rocked by the Fishrot scandal.

There has been a blame game in the Seaflower Pelagic Processing partnership saga. Fishcor has indicated it wants to end the tainted joint venture.

It is questioning the validity of three agreements with Louw, who said the partnership started two years ago.

But Louw is pointing fingers at Fishcor, accusing the state-owned company of failing to provide 94 000 tonnes of horse mackerel quotas worth an estimated N$250 million.

During the interview last week, Louw also spoke about Celax Investment Number One, a shareholder in a Seaflower Pelagic Processing-related company which is now accused of money laundering in the Fishrot scandal.

Louw said De Klerk, accused of facilitating a bribery scheme worth more than N$200 million through Celax Investment, should answer for his own alleged sins.

Louw insisted the partnership with the state-owned Fishcor was not part of the Fishrot scandal.

“Seaflower Pelagic Processing is not involved in money laundering or involved in any court case. We are not aware of any investigation by the Anti-Corruption Commission (ACC) and have not been approached by them. We have publicly stated that we will assist in any investigation,” the businessman said.

The partnership was rubber-stamped in 2017, around a month after Hatuikulipi travelled to Angola to view fishing factories owned by Louw’s companies.

That joint venture raised eyebrows in the industry.
Some accused Louw of piggybacking on government money to bankroll the fishing factory he appears to want to fully take charge of if the partnership is terminated.

Estimates by The Namibian show the fish would be worth around N$20 billion in 30 years – calculations disputed by Louw.

The government decided to end that partnership earlier this year after several reports linked potential money laundering to a company called Celax Investments Number One.

Celax, previously owned by lawyer Marén de Klerk, had a 33% stake in Louw’s African Selection Fishing Namibia, which owns 60% of the joint venture with Fishcor.

Fishcor wrote to Louw on 25 September 2020, notifying him that they intend to terminate their agreements with Africa Selection Fishing Namibia.

“I hereby notify you that the board of Fishcor resolved to terminate the joint venture agreements with immediate effect,” Fishcor’s board chairperson Mihe Goamab II said.

He said the Fishcor agreement that promised Louw’s company 15 years of free quotas is also terminated.

Goamab II used the government’s directive to cancel the partnership as a reason to start afresh.

“In the interest of Fishcor, the board has resolved that it must make a clean break from its association with Seaflower [Pelagic],” he said.

He said the agreements between Louw and the previous Fishcor board were tainted.
“Not only were the relevant agreements entered into between minister Esau and James

Hatuikulipi apparently part of a corruption enterprise, but the agreements are also tainted by the corrupt network framework,” Goamab II said.

The Fishcor board believes the joint venture agreements are not enforceable and were not concluded in good faith.

Goamab II declined to comment on the latest developments when approached for comment yesterday, saying the public will be informed.

Louw last week said he is not bitter. “We believe in the rule of law and it will take its course. I do not believe it is feasible to force anyone to stay in a sour marriage.

We remain open to amicable solutions being found and will continue with our original aim to operate a successful land-based plant that believes in increased employment of Namibian citizens,” he added.

A bone of contention could be the decision over who would own the seaside factory that was constructed by the partnership.

Louw said a process of arbitration would have to be followed where issues such as damages would be discussed.

“The business will go on. I believe that this matter will serve as a precedent,” he said.

Deputy judge president Hosea Angula made some scathing findings about Seaflower Pelagic’s relationship with Fishcor in a judgement delivered on 27 August.
The judge said Fishcor over-promised something it could not deliver.

One of the key people implicated in the Fishrot scandal is lawyer Marén de Klerk. His footprints are on documents worth more than N$200 million in the space of three years.

“He was referred by another well-recognised attorney. After this he became my personal commercial lawyer,” he said.

By that time, there were already online news reports about how De Klerk represented politically exposed people like Shanghala.

“I did not do a Google search on him. I found the man to be a capable legal expert and he was efficient. Again, I reiterate, I did not expect this from him. Especially further because of the number of years he was my lawyer,” Louw said.

The businessman said the law should catch up with his ex-lawyer if he broke it.

“I never expected he would turn out to have been part of a corrupt activity. I trusted him. I am very disappointed in him,” he said.

De Klerk has been in South Africa since January this year. The two spoke two days before he left, but Louw insisted he did not know of De Klerk’s deeds.

The lawyer used Celax Investment Number One and even transferred millions into investment companies for several weeks.

Louw said Celax was initially set up as an empowerment entity to co-own the Fishcor partnership.

“The idea was that it would benefit community groups, veterans, women and the youth. We received a few suggestions of groups that we could accommodate,” he said.

“But then the Fishrot scandal happened, and we have not been able to further this narrative,” Louw said.

He also disputed suggestions that the tainted partnership was worth N$20 billion.

“Not even a straight quota sale of 50 000 tonnes will nett that. And it was reported as nett value in these articles,” he said.

According to him, there was no government guarantee to enable the set-up of the plant.

“The company never received any money from DHC attorneys, nor from Celax. No funds were received by any of the directors from these entities,” Louw said. 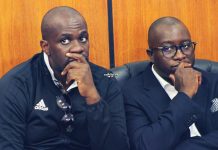